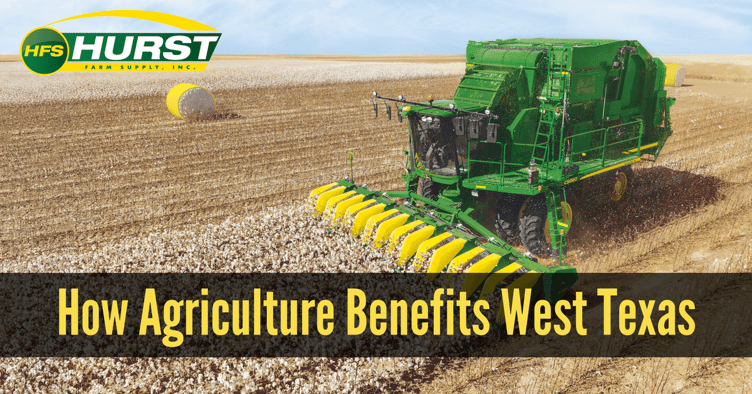 Agriculture in West Texas is a topic close to our hearts. We work daily with the hard-working individuals of our area who are connecting to the land and livestock to create abundance and improve our lives.

So often the bounty we receive from the farmers and ranchers in the area can be taken for granted, and we wanted to take this opportunity to highlight the benefits agriculture has brought to West Texas.

Despite being considered an agriculturally thriving region today, West Texas was not always viewed as a productive or fertile portion of the country. In fact, it was dismissed in 1850 by an American official named John Russell Bartlett as a “desolate, barren waste.”

We, of course, know better. So, too, did the Native Americans who lived here and the settlers who showed up in West Texas during the 1870s. Those early West Texans persevered with agricultural know-how and large-scale irrigation efforts. The hard work of those early farmers has led us to the thriving agriculture environment we recognize today.

Rising to the Top

West Texas is home to a number of thriving agricultural industries, including sorghum, corn, poultry production, and cattle ranching. The top crop, however? That would be cotton.

A quick look into the cotton industry shows just how much the United States benefits from agriculture here in West Texas. Just a few of the benefits include:

New cropping systems combined with an active interest in scientific research and development has placed our region at the forefront of the cotton industry.

A Sense of Resilience

Agriculture in West Texas has taken heavy blows from natural disasters such as the Dust Bowl and multiple devastating droughts. During each of these harrowing periods, many farmers and ranchers were forced out of business. The determined spirit of the West Texans refused to give up, however, and with each disaster a handful of farmers were able to pick up the pieces and soldier on.

This determined spirit is something we encounter each and every day in our work with local farmers and ranchers. Our customers represent the roots and grit of West Texas, connecting with the land and providing us with the bounty they harvest.

Here at Hurst Farm Supply, we take that West Texan dedication to growth and innovation seriously and implement it in our company’s mission. We strive to provide high quality, cutting edge farm equipment and service to our customers, without sacrificing our commitment to personable one-on-one interaction.