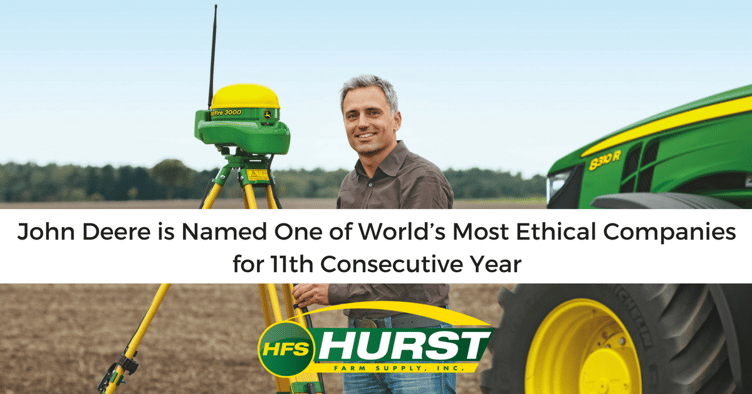 The Ethisphere Institute has once again selected Deere & Company as one of the World's Most Ethical Companies. It’s the 11th consecutive year that this honor has been bestowed upon the company. It’s one of just 13 companies in the world to win the award every single year. The company is very proud of the accomplishment.

"Integrity is an important core value at John Deere that we emphasize throughout our business with all employees," said John Deere chairman and CEO, Sam Allen, announced when he received the news. "We continue to seek the highest ethical standards as we know this is one reason John Deere is celebrating 180 years of doing business."

Winning the Ethisphere Institute’s praise isn’t easy. Before John Deere is even considered for the award, the company must fill out a detailed survey that includes 200-questions that provide the Institute with information about how the company handles ethics during its regular business practices. After reviewing the answers provided by John Deere executives, Ethisphere takes steps to verify each response. Verification sources that are used include SEC filings as well as documentation John Deere filed with various business and environmental organizations. Ethisphere employees a team of analysts who research litigation disputes, the John Deere’s history of ethical decisions, and overall reputation.

Ethisphere has a list of five things they consider when reviewing a company, including:

Hurst Farm Supply could not be any prouder of the John Deere company. Hurst and John Deere has a relationship that dates all the way back to 1955, and during that time, we've found that John Deere not only produces the high-quality equipment West Texas farmers and ranchers deserve, but that they're also a company that always treats their customers, employees, and dealers with a great deal of respect.